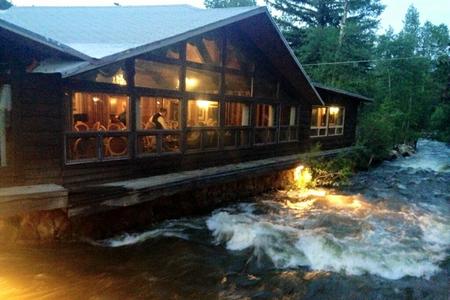 ​​Founded in 1967 by Nicky, with a vision to craft the highest quality steaks, to which end he bought four Grand Champion steers, Nicky's has been the premier Steakhouse in Estes Park for over half a century now. And although Nicky himself has stepped down, he could not have chosen a worthier successor than Chef John, whose aim is to also bring the highest quality seafood to the town of Estes Park. John started in the restaurant business when he was only 18 years old as a busser for the first Bennigan’s in Colorado. From there he worked his way up to from a chef’s apprentice in Denver to an executive chef in Plymouth, Massachusetts. And although recent times have caused our menu to shrink down significantly, we will be continuously working towards the direction of introducing more tasty culinary delights.

Visit us on 1350 Fall River Road, and enjoy a delicious steak in the most romantic setting.

And on the fifth day, God probably said, "Let there be a Paradise City", and there was Estes Park. One of the most beautiful towns in the world and the gateway to the Rocky Mountain National Park, you'll be greeted to endless astounding views, views of the beautiful rainbow trouts, the majestic elks, the ever pleasant hummingbirds, and rabbits running around and playing with people. Named after the first permanent residents of Estes Park, Joel Estes, and his family, Estes Park's true history starts when F.O. Stanley, who established a large portion of its infrastructure and built the Magnificient Stanley Hotel, the famous ghost hotel in 1909. Today, Estes is as beautiful and ever, and the perfect vacation place for anyone to visit.

P.S.:- Forgot to mention, we are right on the way to the national park and if you visit us for dinner, and move ahead to the national park, on a clear day, you'll be able to see the entire Milky Way galaxy as you will be on the highest continuous paved highway in the world at over 13,000 feet, and on a lucky day also catch glimpses of shooting stars.